Good news, readers - well, as good as we can get considering there wasn't a new Breyerfest reveal today. But anyway - Breyerfest tickets will be available for purchase on February 1 at 1pm EST! Woohoo! The ticket pages will go live on Monday so people can decide what they want, and there'll (presumably) be a new reveal on the blog as well! If I'm counting right, we're only waiting on the regular Limited Edition Stablemate and the online Trad and Stablemate, if they do those again this year. So I'm excited for Monday! Have a good weekend, everyone!

Posted by fabala at 9:28 PM No comments:

We have a plush! 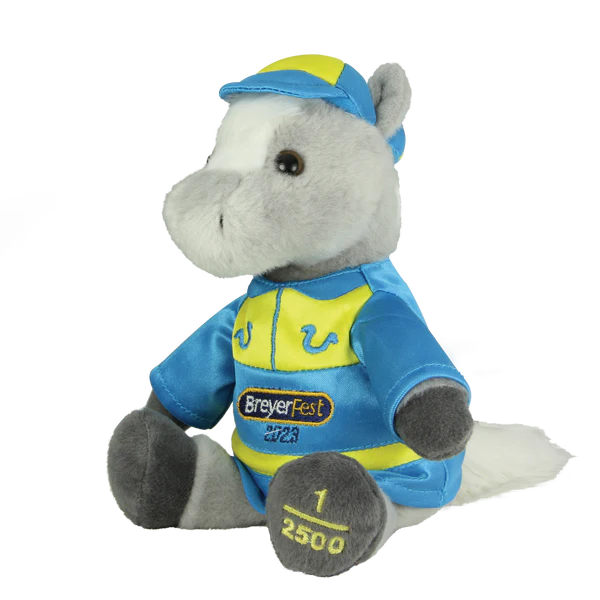 For today's Limited Edition reveal, we are so excited to show off to fans this year’s adorably squishable plush! Sulky is ready to roll in his snazzy BreyerFest silks, featuring the BreyerFest logo embroidered on his front and the Driving Forward logo imprinted on his back.

Nothing I need, but he sure is cute!

I can't help but notice the blog post doesn't say there's another reveal tomorrow, so I'm guessing we either get nothing or a sneak peek for next week. Boo! Well, let's hope we get something anyway.

Posted by fabala at 5:53 PM No comments:

Good news, everyone! We have another Breyerfest Limited Edition reveal - the Best of Breyerfest Stablemate set! Behold: 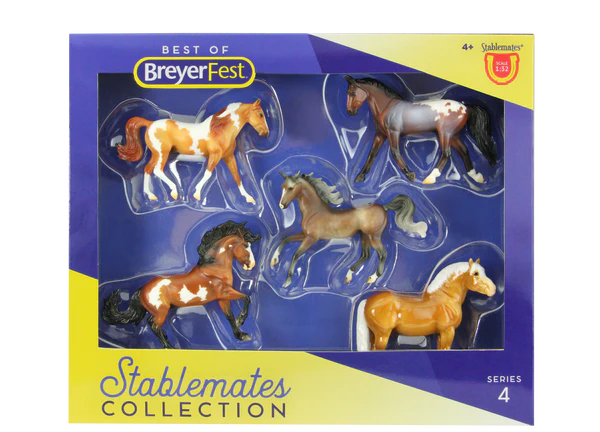 Ooh, nice! They're based on models from Breyerfest 2013 this time. Here's closeups, starting with Singletree: 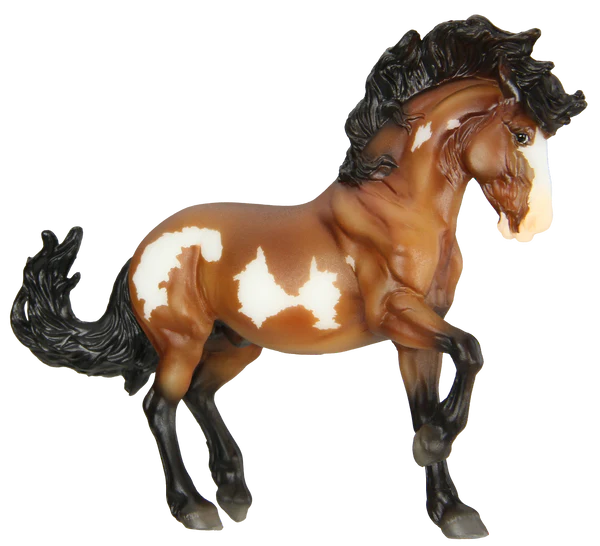 He's based on the Honky Tonk early bird model on the Nokota, all three of whom seem to have disappeared into the ether. Next, here's Liverpool: 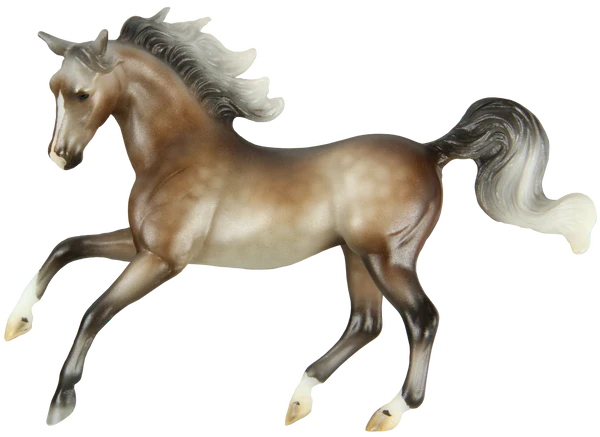 She's a mini version of Music Row, the Open Show Reserve Grand Prize. For some reason I got really confused by this model and thought she had a different tail than the usual Magnolia, but I must be imagining it. In other thoughts...the first thing I thought when I saw this one was GIVE THIS MOLD A REST ALREADY, SHEESH. There have to be some other molds out there that have existed for twice as long as this one has but were given half as many releases.

Okay, anyway. Next we have Whippletree! 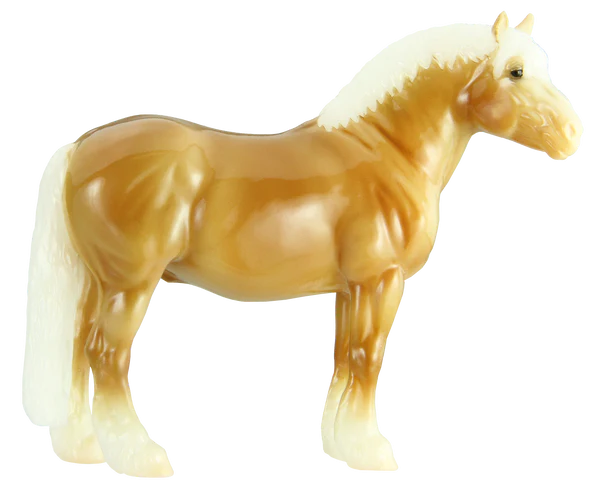 He's a mini version of the 2013 Breyerfest volunteer model Opry. I wonder if some of them will be matte in a sly reference to the fact that the three manager Oprys weren't glossed? Heh. 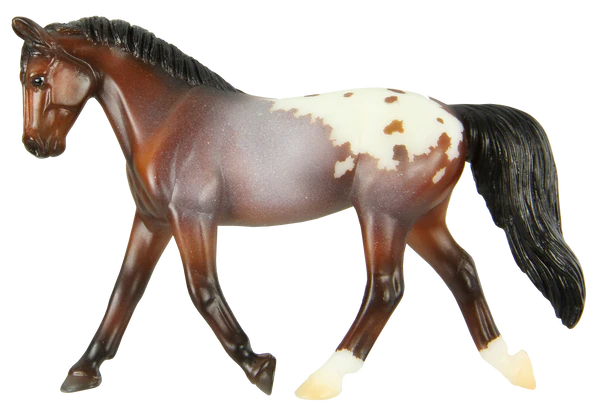 This one is based on Minnie Pearl, the Open Show Grand Prize model. Looks like her color matches pretty well! 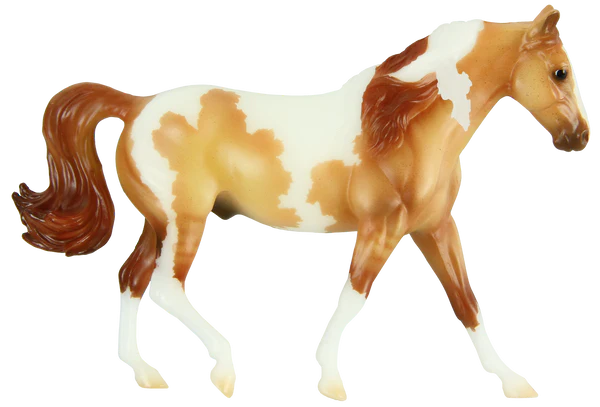 He's obviously a small version of Walk of Fame, the 2013 diorama prize model! Very handsome, though I feel something is missing without his ribbons.

All in all, a pretty nice set! I only need two of them, though (Singletree and Whippletree, natch), but it shouldn't be too hard to separate them out and sell the others later. There's yet another reveal coming tomorrow, so I'll be watching the blog again tomorrow to see what it is!

Posted by fabala at 8:16 PM No comments:

Well, readers, we have our Breyerfest crystal model! 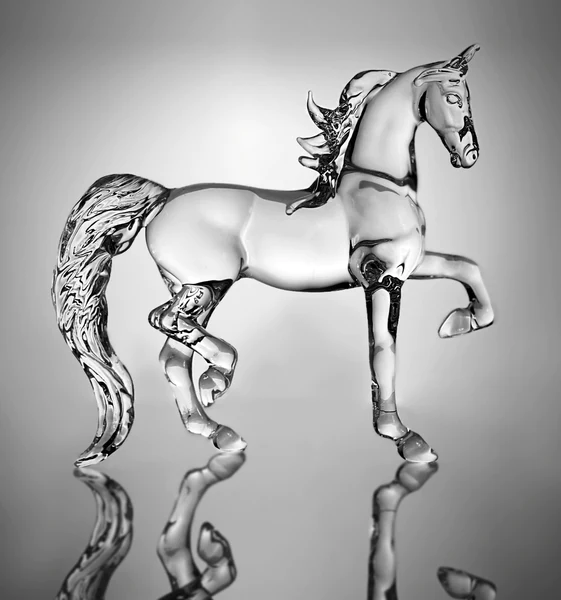 Well, that's something of a surprise - I don't think anyone was expecting Calliope to be converted to crystal. From the blog:

For this year’s celebration of BreyerFest: Driving Forward, we’ve created Phaeton, a stunning crystal version of Kathleen Moody’s American Saddlebred porcelain model Calliope, who will be a part of this year's Limited Edition model lineup. Though the original porcelain release was about the size of a Traditional model, this scaled-down version is about 5” tall and a perfect fit for your curio cabinet.

Nothing I need, thankfully. There's supposed to be another reveal tomorrow - maybe it'll be the plush? Or the single Stablemate? Or something else? Let's hope it's something exciting!

We also have our first test model of the year! Collector Club members can enter for a chance to purchase this test run, on the Misty mold: 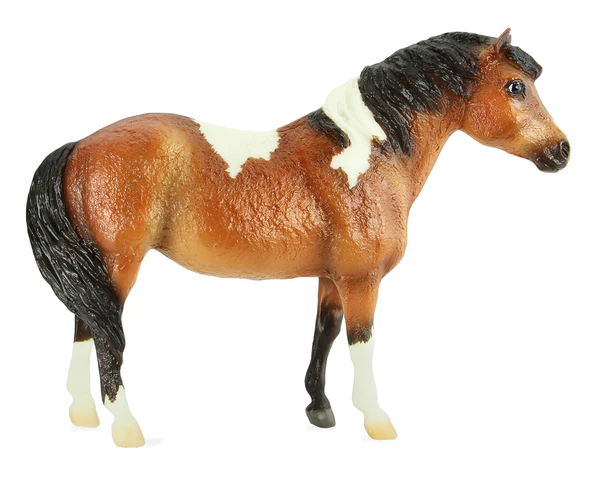 It's rare to see Misty in any color other than the Misty colorway, and I think this one looks pretty nice on her. Not nice enough to enter for her, though - I'm not a Misty fan, nor do I feel like spending $1,000 right now. The entry deadline is 1/26 at midnight, so don't waste any time entering if you want her. Good luck to everyone entering!

Posted by fabala at 5:30 PM No comments:

SHUT UP AND TAKE MY MONEY!

Happy Monday, readers! It's the start to another week of exciting Breyerfest reveals - and Breyer definitely started things off with a bang! Say hello to the last Traditional Limited Edition for Breyerfest! 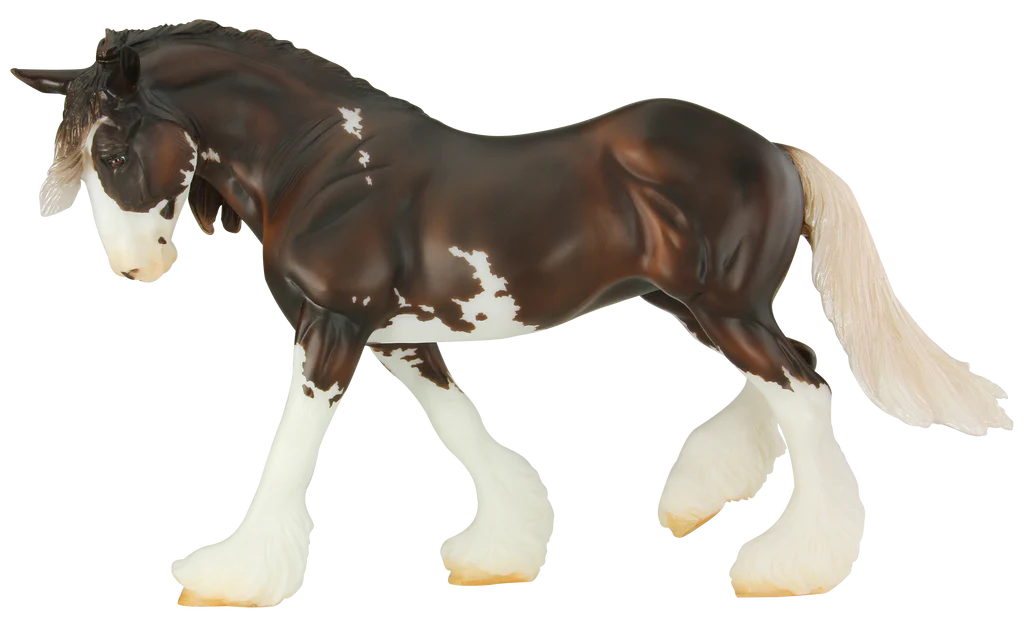 When you think of the Drum Horse breed, the first thought that usually comes to mind is a horse carrying a large set of drums in a parade. FVA’s Grand Design, known as Tilly in the barn, is breaking the mold and showing the world just how versatile the Drum Horse can be!

A new Othello? Say no more! He's pretty much my favorite mold, and this is the first time we've seen him as a mare, so I gotta get one. This means I don't have to worry about him being the surprise (not that I was worried anyway), and I don't think we're likely to see a glossy version of him later - I think she'll sell well enough not to need the glossy treatment. Although I wouldn't say no to a glossy preorder option. I've seen some complaints that she looks too similar to the regular run SBH Phoenix, but honestly I don't think it'll be hard to differentiate between the two, especially with the white tail on this one.

In other news, Flamingo winners were drawn today, and I was one of the lucky winners! I really didn't think I'd get drawn for her, so that was one order I was happy to complete as fast as I could. Can't wait to see her in person! Congrats to all the winners!

Posted by fabala at 6:26 PM No comments:

Well, we have our ninth Breyerfest special run (clearly I forgot how to count yesterday)! Here she is - say hello to Scurry! 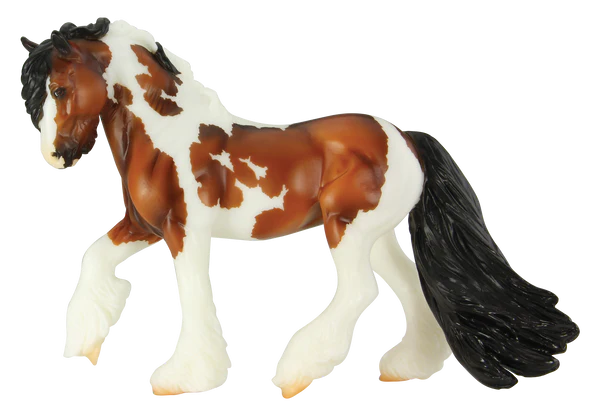 For our final BreyerFest: Driving Forward Special Run model reveal, we wanted to make sure we included an adorable pony in the mix! Scurry driving is where a pair of ponies competes for the best time pulling a carriage through a course of cones. It was developed in the 1960s and stems from chuck wagon racing, another exciting equestrian sport!

It's good to see the Fell Pony get used again, even if she is similar to the mini Fell Pony that was just in the Tractor Supply blind bags last year. Oh well - I still want one! She's definitely going on my list.

The blog says there'll be another reveal on Monday - my guess is the crystal or another Limited Edition. I'm sure we'll see the rest of the Limited Edition stuff next week, and if we're really lucky we'll get to see the raffle models! So I'm excited for Monday! Also thankful that they actually revealed this one today rather than giving us a sneak peek and leaving us hanging all weekend.

In other news, the drawing for the six glossy Zafirah models from amongst the 2022 Premier Club members has evidently finally taken place, so be sure to check your email and/or your spam folder to see if you were drawn. I wasn't one of the lucky winners, but the odds of being drawn were pretty dang low, so I'm not that upset about it. Better luck next time, I guess!

Posted by fabala at 7:51 PM No comments:

Greetings, readers! Another day, another Breyerfest reveal - and this one is a doozy! I guess I spoke too soon when I said we'd found our Pollock/Stein equivalent for this year - behold! 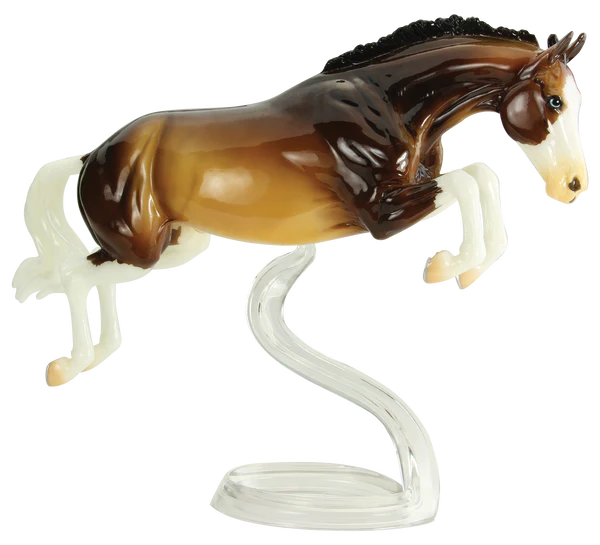 His name is Jump & Drive (incidentally, I'm not a fan of this new ampersand trend). What a hunk - but somehow, I'm kind of underwhelmed by him. Not sure why. Maybe it's his blue eyes? Not that I don't want to buy him, and I'm not sure what could be done to make him even better. I guess he looks a lot like the sable champagne Seven Arts Surprise from 2021. But that isn't a bad thing - I just feel like I should like him more than I do. Maybe if his mane was inexplicably white too? I don't know. Either way, I'll probably put him on my VIP selections to be sure I can get one. Happily, the blog says the last special run for Breyerfest will be revealed tomorrow! I guess they're going back to 8 special runs after having 9 for the last three years.

Today's other exciting reveal was the first web special of the year! Good news - the Birds of a Feather series continues with Flamingo! 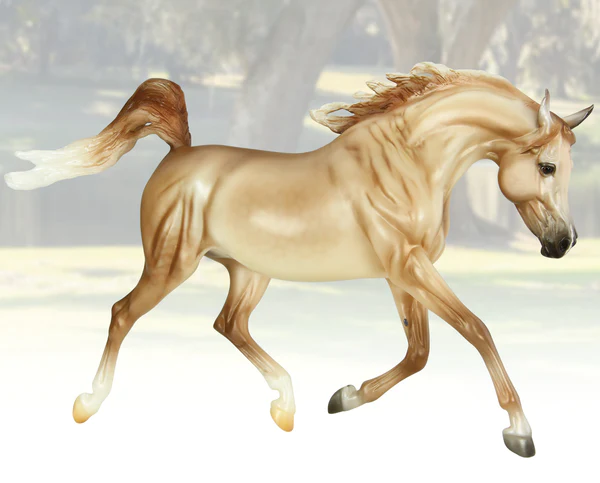 I have to be honest here...I'm underwhelmed by this one, too. She's supposed to be a rose grey, but she looks more like the perlino Poppy & Ollie or Apollo, to name a few. I think she'd have matched her name better if she were red roan, or looked more like this Thoroughbred colt I saw at Taylor Made back in 2019: 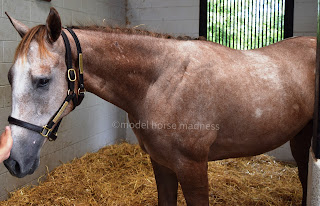 His name is Ghostliner, if you'd like to do some career research on him. Anyways, that's a lot closer to pink than what we have in the photo above.

Edit: I was going to mention that Breyer may have wanted to keep her an Arabian color and red roan doesn't occur in the Arabian breed, hence the rose grey instead. But rabicano is a thing in Arabians...so, that would have been an option. Oh well. Bonus: here's a photo of Ghostliner as of July 2022 when he was sold at a Fasig-Tipton sale. 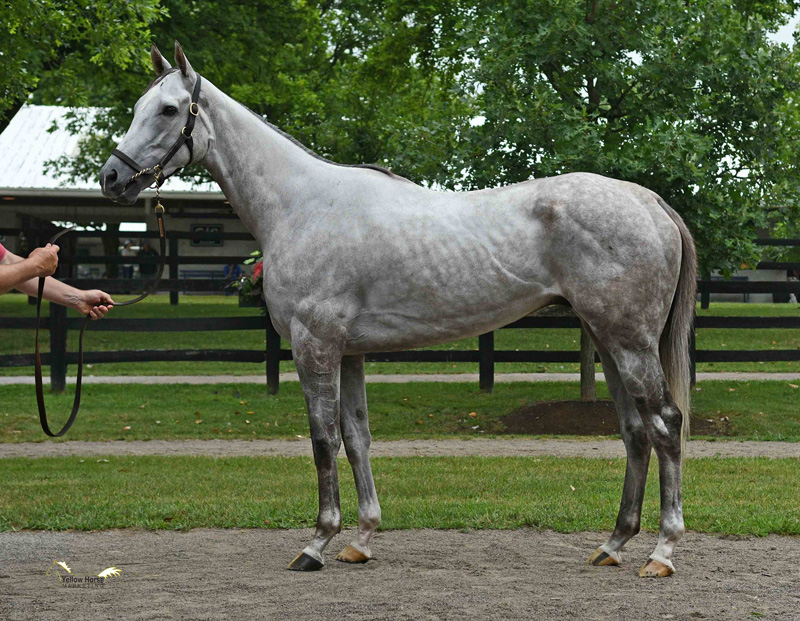 But, Flamingo still pretty and I hope I get drawn for her! Let's hope I have better luck with web specials than I did last year. The run number on her is back down to 500 though, so the odds seem slim. Anyway, good luck to everyone entering for her!
Posted by fabala at 9:18 PM No comments:

I am not affiliated with Breyer or Reeves International in any way.

If you have a comment, question or would like to reach me, send an email to modelhorsemadnessblog at gmail.com.